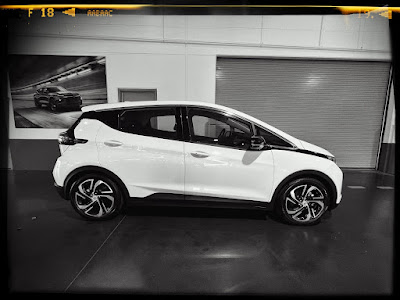 Having driven the new car for a few days now, I've gathered a few thoughts about the differences between my previous Tesla Model 3 and this new Chevy Bolt.  Fun fact: I haven't test driven the last two cars I purchased.  That is an absurd statement.

The Tesla that I owned previously was a 2019 model year, "Standard Range Plus" version with a maximum of 240 miles of range.

My new car is a 2022 Chevy (I refuse to type "Chevrolet", tho I just did...) Bolt EV 2LT.  Maximum range: 259 miles.  On paper, that doesn't seem like much of a difference. But my goodness, in real world driving comparisons, it seems night and day.  My commute to work is a healthy 31 miles each way, and I was always conscious of what my battery started and ended at.

For example, any given weekday morning, I would wake up with ~185 miles of range on my Model 3 (I would charge to 90% only).  Given maths, one would assume that I arrive at work with around 154 miles of range left.  More often than not, however, my range would be in the 140s.  On occasion, my gauge would correct itself and say I had 150 or 160, but that was rare and only really on 70º mornings, when the battery was at it's nominal temperature.

Now, I realize I only have a few days of real-world usage, but I've only had to charge my car once in the 4 days I have had it.  This morning in particular, I started my drive with 226 miles of range (again, charging to 90% because no one can seemingly come to a consensus online about charging best practices) and ended my drive with 212 miles remaining.  Now, I have some observations about this discrepancy.

Driving habits: I would drive my Tesla hard.  I never used "Chill mode".  It was always balls to the wall, bat outta hell style driving.  This is my fault.  But no one could challenge me on the road.  Each launch at a green light would cost me dearly.  The Bolt? She has not yet entered "Sport Mode", which basically means I am running this car in Chill mode 100% of the time.  It's served to calm me down.  Plus, it's a new car, so I am babying her.  I haven't taken Max above 75mph.

Overall efficiency: This is a smaller car.  It's obvious just by looking at it in the garage. I am simply not launching a longer, heavier car around the freeways. (update: I am full of garbage.  The weights are nearly the same: 3552 lbs vs 3289 lbs)

Regardless, I am seeing some huge advantages with this newer EV.  Anecdotal statements from subredditors say that Tesla's range estimation algorithm is messy and unpredictable.  Sure seems that way, to me.

So, what do I like about the Bolt more than my previous Model 3?

There are quite a few other things I really like, but I think this entry is getting boring. So, how about what I don't like?
In the end, the pros outweigh the cons.  She's still an EV, so that makes it a win for me.  How about y'all?  Any questions for me about my experience in switching away from a Tesla?
at 4:25 PM 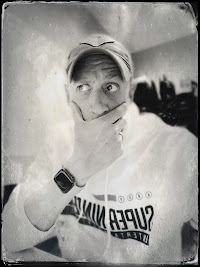